A dilemma experienced by the Filipino youth.

A violent, inhumane test of courage and loyalty as a form of a pledge to a fraternity. Where hundreds of students, particularly college students, are harassed, abused and humiliated in order for them to gain acceptance into a popular group on campus. While college hazing is considered as a norm, more and more students are killed or injured, which is alarming because brotherhood, as we all know, should emphasize love and support rather than abuse and maltreatment. And it is dreadful that such activity is still present as of today. That it still increases the number of young lives taken away inhumanely. 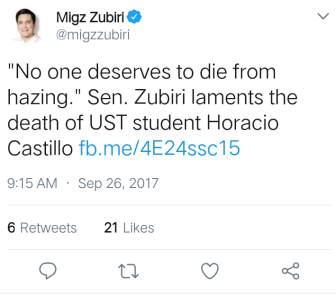 “No one deserves to die from hazing”

Senator Migz Zubiri used social media platforms to show his lament to Horacio Castillo III, a student of UST, who passed away because of hazing. The death of the student sparked the flames in Zubiri to speak up about the issue arising in our country; he felt the need to bring this topic to the senatorial board because he knew that the members of the senatorial board have the power to change this tradition with their decision and commands. As said in the video, Sen. Zubiri proposed a new Law that prohibits all acts linked to hazing and if the members of the board agree to this, with the help of Sen. Zubiri’s passionate speech, then they could easily end the suffering of aspiring youths who want to be part of a brotherhood. ‘To end this violent and senseless crime’, as Zubiri would say. Zubiri’s words really hit deep within the conscience of the people, because his words have depth in them. Saying that “So much senseless deaths. My dearest colleagues, so much wasted youth” really speaks volumes about the impact that hazing brings to our country. These words really do pack a punch that shakes us back to reality, the cruel reality.

Moreover, using Twitter to reach more audience by linking his post from Facebook, Zubiri was able to extend his views and was able to impart knowledge about the topic. This can be of great help as more people would be knowledgeable about how hazing is alarming and could encourage them to practice their rights as concerned citizens, this could be in means of rally or petitions to stop hazing. Especially in the modern world where people are more active in the virtual world rather than in reality, they tend to gain more knowledge through the use of the internet and posts on social media.

But, to be blunt, Social Media can be of disadvantage at times; however, it could be advantageous in the sense that a greater audience could be reached, particularly Filipinos, who are greatly linked to technology compared to offline media such as magazines and newspapers. Filipinos still choose to be updated through the use of different social media platforms as it is more convenient. Nevertheless, the use of different media wouldn’t change the persuasive quality of the article. However, the reach to its audience and the ability to increase transformed and persuaded individuals would because, as what was stated, people rely more on social media than offline media.