Living in a free country, we subconsciously found ourselves on the thread of flooding opinions and comments especially in different social media platforms. Everyone has something to say- many will like your comment if it’s something good (for them) and many will bash you to hell if otherwise. Nevertheless, we tried to react on this certain tweet of Senator Grace Poe on her twitter account @SenGracePoe of her commentary regarding the agricultural problem left after the wrath of Typhoon Ompong in the country.

Mary Grace Poe-Llamanzares, adopted daughter of actors Susan Roces and Fernando Poe, Jr, is a senator,  businesswoman and a philanthropist. She served as chairperson of the Movie and Television Review and Classification Board from 2010 to 2012 and in the Philippine Senate since 2013. She also ran as presidential candidate during the 2016 elections but was overthrown by Davao City Mayor Rodrigo Duterte. She authored bills on Film Tourism, Free Lunch Program and the Freedom of Information Act

In line with this, to comprehensively analyze the tweet, we tried to carefully give our reactions on different categories. Here’s the tweet from Senator Poe published September 15. 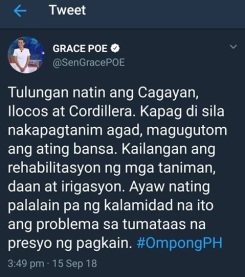 The exigence present in this situation is that of the aftermath of Typhoon Ompong (Mangkhut) which caused 14-billion peso damage to agricultural areas specifically around Central Luzon. Due to the terrible cost, Senator Grace Poe fears that the food supply of the country will hit a critical level and may cause an increase in the prices of agricultural commodities; hence, she also dreads that the country will be experiencing hunger. The senator tries to point out to the readers that substantial financial aid for these areas in terms of rehabilitating the fields, roads, and irrigation will mitigate the disaster in the economic inconsistencies of the country. Moreover, she tried to logically present the situation by vividly pointing out the future events.

These important numbers were precisely not included in the tweet neither a certain article was attached to it nor records from the Department of Agriculture. How can we lend a help if Sen. Poe doesn’t give us substantial matters regarding the onslaught of the typhoon? Some important facts are lacking.

The tweet’s target audience is quite unclear.  Is it directed to the farmers? Department of Agriculture? Private organizations? The senators? Or she’s just reminding herself?

Kapag di sila nakapagtanim agad, magugutom ang ating bansa . . . (masyadong advance mag-isip?). By definition, Slippery Slope Logical Fallacy is a consequentialist logical device in which someone asserts that a small first step leads to a chain of related events culminating in some significant effect. Senator Poe here tries to warn the readers by citing the worst case scenario for the country if the agricultural problem will not be worked out immediately. For us, though its fallacious in nature, it’s quite a good read at least we can grasp the bigger picture of what will happen.

Ability of the medium

The tweet created 149 replies, 14 retweets, and 84 likes (as of the time this article was made). Compared to other denominations of retweets and likes coming from other Twitter users (esp. politicians), this seems to have a short reach – also considering the fact that Senator Grace Poe has 110,000 followers and has 129 accounts being followed. This does not improve the credibility of the tweet because after all it failed to amass a huge number of responses from the people even so if it was published through various offline means. However, the use of the unified hash tag (#OmpongPH) greatly improves the dissemination aspect of the tweet.

It is through Grace Poe’s tweets which captured news agencies to broadcast her advocacy to give a quick-release of calamity funds for the affected agricultural areas of Typhoon Ompong. This also led the senator to appeal to the government to provide seed subsidy to farmers in Northern Luzon and pushed to release 16.9 billion to aid the victims. However, if we try to see the view of the public, many were not even moved that they tried to lash out at the tweet by telling the senator to help and stop sitting pretty in senate. The tweet obviously tapped the government sector but it failed to call for public unity.

Technically, for someone who is running for a senatorial slate, this tweet leaves quite a good impression to the public. The creation of laws is predominantly the job of the senators and other legislative body.  Then, Senator Poe tweeted: Tulungan natin ang Cagayan, Ilocos, at Cordillera . . . To whom does senator refer this to? To the public? Then what can the public do in the case of the tweeted “Kailangan ang rehabilitasyon ng mga taniman, daan, at irigasyon.” Isn’t it the job of these people in the government? Does that statement mean the government is taking a blind eye or too lazy to act? If not, why did Senator Poe calls action for her FELLOW senators? For us, it’s just another vague provocation trying to epitomize a good figure of a senator or how a politician should come out “better” to other politicians.

In the interim, we would like to quote Thomas Hardy, “My opinion is that the poet should express the emotion of all the ages and the thought of his own.” Amidst the flood of opinions on social media we should remain critical and vigilant for issues that affect not just us but our country as well. Remember: your mouth can spit venom but more importantly, your words have power that can inspire the nation.

Disclaimer: The authors’ views and opinions do not necessarily intend to attack the subject politician personally, and were only made based on the chosen social media statement. Furthermore, the intentions of the authors were solely made for the purpose of critical analysis and biases and/or political affiliations were strongly discouraged during the critiquing and commenting process of the assigned task.

Rappler. (2018, September 16). IN PHOTOS: The wrath of Typhoon Ompong. Retrieved from Rappler.com: https://www.rappler.com/nation/212089-in-photos-the-wrath-of-typhoon-ompong