Globalization and modernization gave birth to many innovations may it be in technology, fashion, physical and internal art, culture, practices, and even words. An addition to terms and to communication spree, it paved the path to new connections and established a much more meaningful approach besides physical contact and intimate words used for affection and influence (Arango, 2008). It has been 57 years since the blooming of the seed of which everything started. It was in the year 1962, when the very first satellite was launched in hopes of connecting people all over the world and merged the influence of graphics and broadcast media. These became the stepping stones of interaction, communication and feedback. Though the stones were not that fully dependable just yet, that didn’t stop the experiments and researches for development and achieve success in the period of supposedly digital age and everything has been carried out up until now, not the same but deemed to be better. 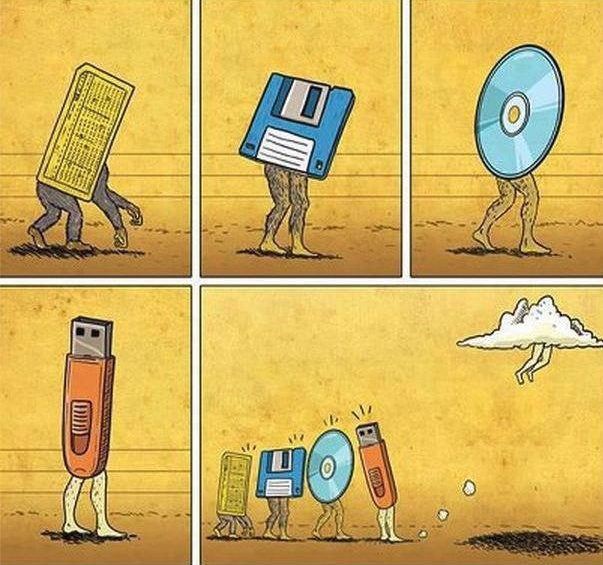 “Moving to the Cloud” from https://techsupportcomedy.com/moving-to-the-cloud/

The way communication progressed have been a major factor in people’s way of living (Kaul, 2012). Before, there were no pens nor paper but merely expressions and words. Communication and sharing in many forms has been observed since day one of breathing. From short noted sounds, to aggressive and expressive actions, and has always been an endeavor to daily whereabouts and exchanged between living species. As time went by, we seek for permanence of information thus print media was invented and as we become subjected to dynamic application, different forms were introduced with the help of technology. Technology has been helping us see a wider view of how and what are the measures that can be done to communicate easier and conveniently.  It became the tool to see what is technically possible and what is desirable to the mass. From codes encoded individually to snap and scan of expressions, everything has all been replaced by easier access and tools.

Imagine, in just a span of 57 years, manually encoded messages are now developed and designed to be easier by just the power of encoding through speech and even automatic transcription.  With just more than 50 years, different brands and models were introduced varying in unique features showcasing different futuristic designs and application. What more after another 50 years? Will the physical features be replaced by flying invisible gadgets that can easily read your minds with a snap of a finger? Or maybe by just clapping a certain sequence can be an equivalent to one sentence or maybe a paragraph meant to be said. All these futuristic designs were only achieved through science fiction novels that turned into proposals and now a living embodiment of the rapid change and powerful minds of inventors and scientists.

In addition to increasing the speed on the access of information at our fingertips, the Internet has added a whole new dimension to communication. Becoming the author of a printed book may take many years of frustrated effort, but becoming a publisher of online material requires little more than the click of a button and all thanks to social media platforms. Innovations like the touch screen and voice operated gadgets are in trend but is also subjected to gradual change and will never be the trend forever.  A change that is slowly reaching its peak is the future of communication with augmented reality. It is the future of seeing the universe and its proponents through a technological overlay. Applications, games, and even the famous augmented reality glasses are reaching its famous tag by letting you see places and people you’ve never reached before. This future stimulates expectations and the accepting of technical communication that aims to overcome barriers. Not just language barriers but as well as physical and other external barriers (Coates, 2007). The upcoming generation will have an access to a lot more personal information and will be introduced to different nations, language, and with the help of the fast making of several emojis designated for different types of emotions, expressions without seeing the users face is comprehendible yet risk on understanding the true intention might grow to confusion. These innovations and communication through this mean is rapidly growing but are we really responsible enough to adapt and be revolutionized by this technology?

According to Kraut (1998), technological driven communication is good, it helps spread information easier, connect with people far from you, and reach out to people you want to reach out. But still, nothing beats the purpose of physical eye contact and warmth of people when communicating. The connection is still different from several circuits and wires designed to move and communicate.

We become more empathetic and compassionate because we personally see and hear the discussions. The interpersonal communication is still influenced by the rapid change but as possible should still be considered and not meddled by technological means (Terrel, 2018).

There should still be a clear line for the usage of such machines and means as we humans main drive is to communicate; may it be with effort or more.

Terrel, S. (2018). What Are Interpersonal Skills And Why Are They Important? [Blog post] Retrieved from  https://blog.mindvalley.com/what-are-interpersonal-skills/amp/